I don’t really have time to analyze this today, but it’s always interesting to see how companies that measure change stuff. I noticed Google’s new filters (a crucial feature) changed today, now it looks like this:

As you might expect, I like the “Everything” label, although “Everything – more” is a bit weird; how can I get more than everything? (Although I also love the “more” label). 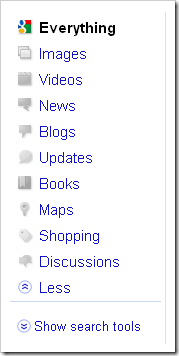 Let’s see how this iteration fares. I don’t think they’ve nailed it yet. The greyed-out icons in particular don’t feel right, and having 2 separate “more” actions doesn’t feel right either.

For reference, here is my previous analysis of the filters (and their big redesign) when they launched.

Hey, it turns out that every Buzz gets a permalink, just like a tweet. Nice. With an SEO-optimized URL too ;)

Here’s an easy way to post from Google Buzz to Twitter and Facebook. They should really build this in, but until they do, here are the steps.

First, find your Google profile. In Google Buzz, you can click here to get there:

Once you’re on your Google profile page, which in my case is http://www.google.com/profiles/petervandijck (because I set it up to have a friendly URL, but it could also contain a bunch of numbers), you need to look in the code to find an RSS feed of your Google Buzz posts. This is a little geeky, but easy enough, the Google docs explain where to find this feed (they should really make it easier to find!). In your browser, look for “View Source”. In Firefox, view source in the menus looks like this: 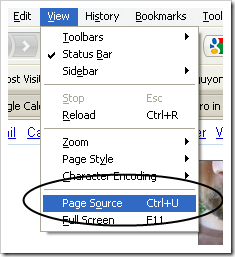 OK. Now you have a public RSS feed with content (from your Google Buzz). From now on it’s easy – there are many ways to get RSS feeds published into Twitter or Facebook. One great way that you can use for both services is Twitterfeed, just go sign up and point your feed to Twitter and Facebook. And you’re done, your posts will now (with a short delay of half an hour or so) be crossposted to Facebook and Twitter.

Google should really make this easier though.

Google has, on the edit profile page, a wonderfully simple UI convention I don’t remember seeing before.

Click on a textbox, and you can start typing. From the moment you start typing, it will add another textbox below it, so you can keep adding items. It doesn’t do that when you put the focus on the textbox though, only once you start typing in it. Wonderfully unobtrusive and effective. A jQuery plugin that does this (getting the details right) would be lovely.

Another example of the more-even more pattern: